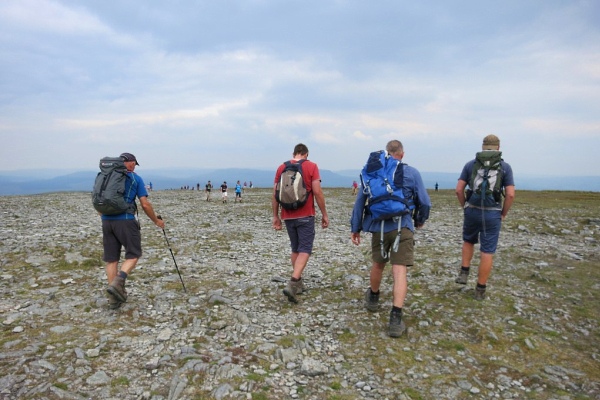 The Yorkshire Three Peaks walking challenge is one of the ultimate outdoor challenges you can do. Taking in the peaks of Pen-y-ghent, Whernside and Ingleborough, the aim is to complete the 24 mile route in 12 hours. 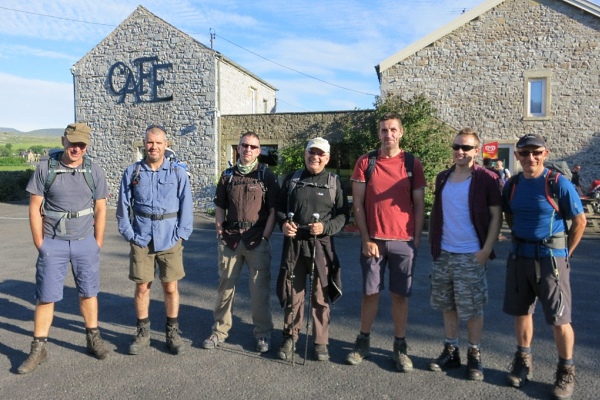 It was an early 6.40am start, on a sunny Saturday morning in July 2014 that our minibus met our walkers in Malham village and transported the group to the start of the walk in the nearby village of Horton in Ribblesdale. The official starting point for the Yorkshire Three Peaks route is the Horton in Ribblesdale Cafe (picture above) where you can also, if you want to, submit your start time and end time to join the list of walkers who have completed the challenge in 12 hours or less. 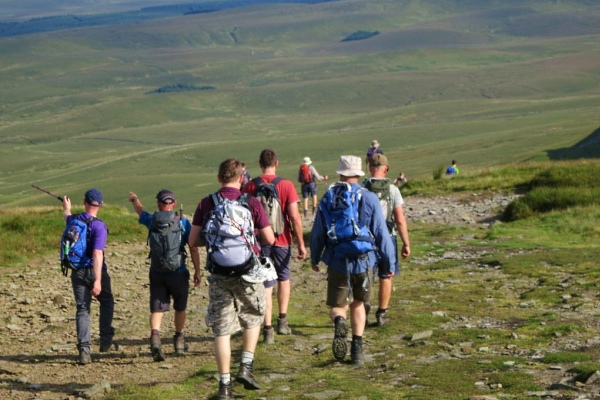 Country Adventures has previously organised Yorkshire Three Peaks walking holidays, often with only our guests and maybe a handful of other individual walkers along the route, but this was the first time we had undertaken to complete the 12 hour challenge and it was a day when there happened to be more than the usual number of walkers walking the route, many of whom were doing it for charity.  Actually seeing so many people on this occasion was good and the camaraderie amongst walkers was nice to see. 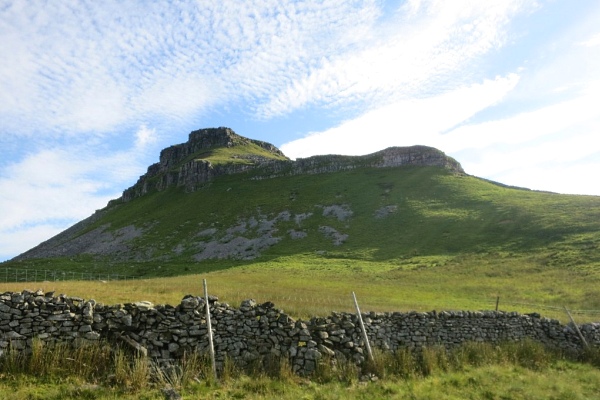 First of the Yorkshire three peaks to reach was Pen y ghent (photo above) which is unique in appearance with it’s craggy limestone peak revealed by years of weather conditions.  At 2277ft, Pen-y-ghent is the smallest of the Yorkshire Three Peaks in height but it’s such an interesting mountain to walk on, with the summit trig point hidden until you make the final push upwards, that there’s a real sense of achievement in reaching the top.  Equally the views from the top can be just as rewarding, and on this particular weekend, the clear blue skies revealed a wonderful panorama of mountain and valley landscapes. 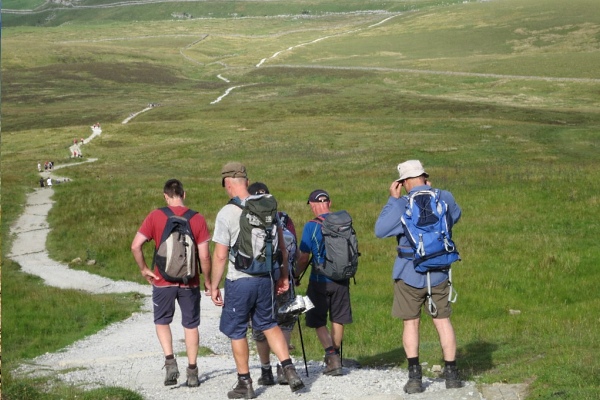 From the top of Pen-y-ghent, the trail weaves downwards along a well defined trail as you head towards Whernside, the 2nd of the three peaks en-route. By the time you reach the start of the Whernside footpath, you’ve already completed 10 miles of your total target of 24 miles so you’re almost half way round! 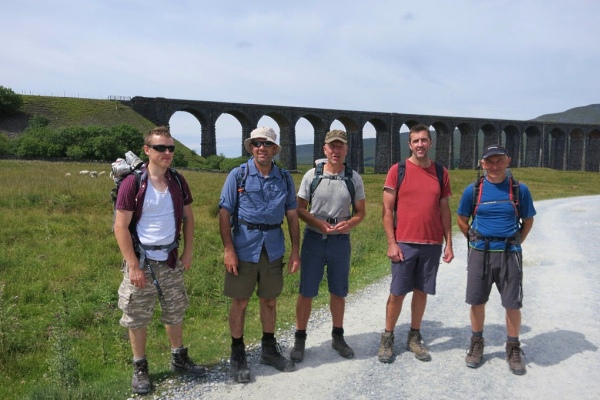 At the start of the trail leading to Whernside, you encounter the famous Ribblehead Viaduct (pictured above) which carries the well known Settle to Carlisle railway line.  It always makes for a good stop to take a photo and even with the 12 hour challenge in mind, the Country Adventures walk leaders still found time to share the history of Ribblehead Viaduct. 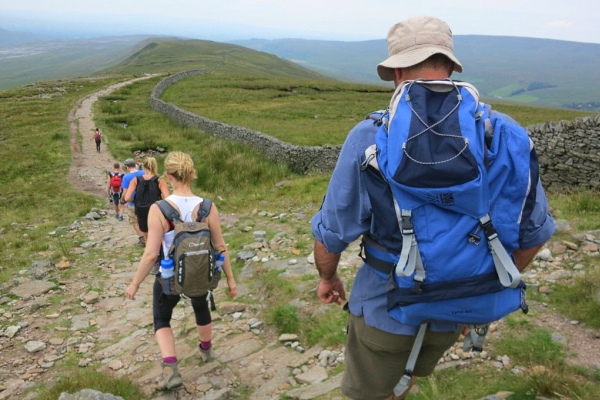 Standing at 2415ft, Whernside (photo above) is the tallest of the Yorkshire 3 peaks and the path across the summit enables you to stay high for a good portion of time which is pleasant and prepares you for the descent to the valley before heading back uphill again for the final 3rd peak, Ingleborough (2372ft). 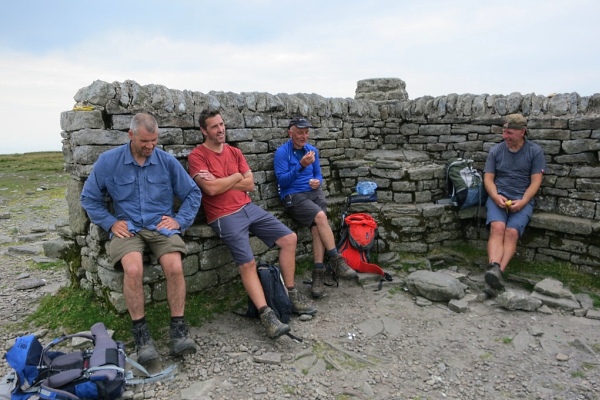 The final push upwards onto Ingleborough is a challenge, especially if by now the legs are feeling slightly tired and you’ve almost reached your goal, but there are several resting places that breaks up the steady uphill walk.  Once at the wide-open top of Ingleborough the sense of achievement for many walkers on the Yorkshire Three Peaks Challenge can be overwhelming as it’s the final uphill section of the day and the only way back to the start, in Horton in Ribblesdale, is downhill.

But before you head downhill, take time and sit at the shelter (as pictured above) to take in the view and your achievement so far.

Photo above is of the top of Ingleborough.

The final 4.5 mile downhill trail from Ingleborough leads back into Horton in Ribblesdale and is the perfect trail to finish what is a very good walking route. That leaves just one thing to do at the end of the challenge, and that’s a well earned pint in the local inn at Horton in Ribblesdale.

Just out of interest, did our walkers manage to complete the Yorkshire Three Peaks challenge in 12 hours…well, the first walkers came in at just under 10 hours and the last members of the party at 10 hrs 45 minutes. A very impressive time which included at least 1 hours total of stoppages for lunch and breaks. Well done everyone. 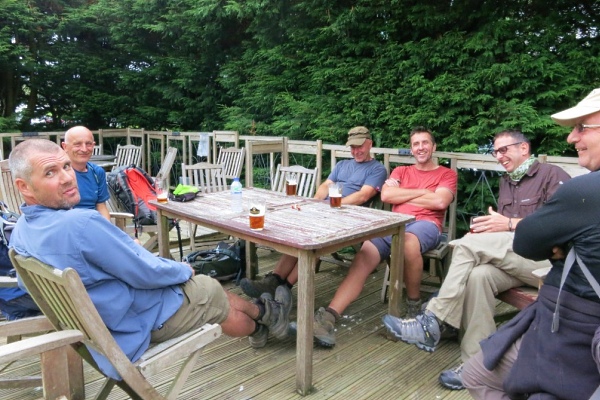 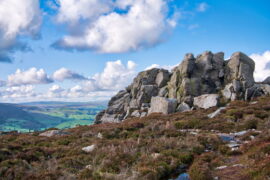 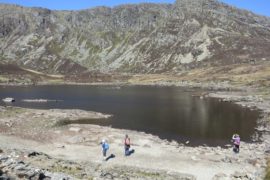